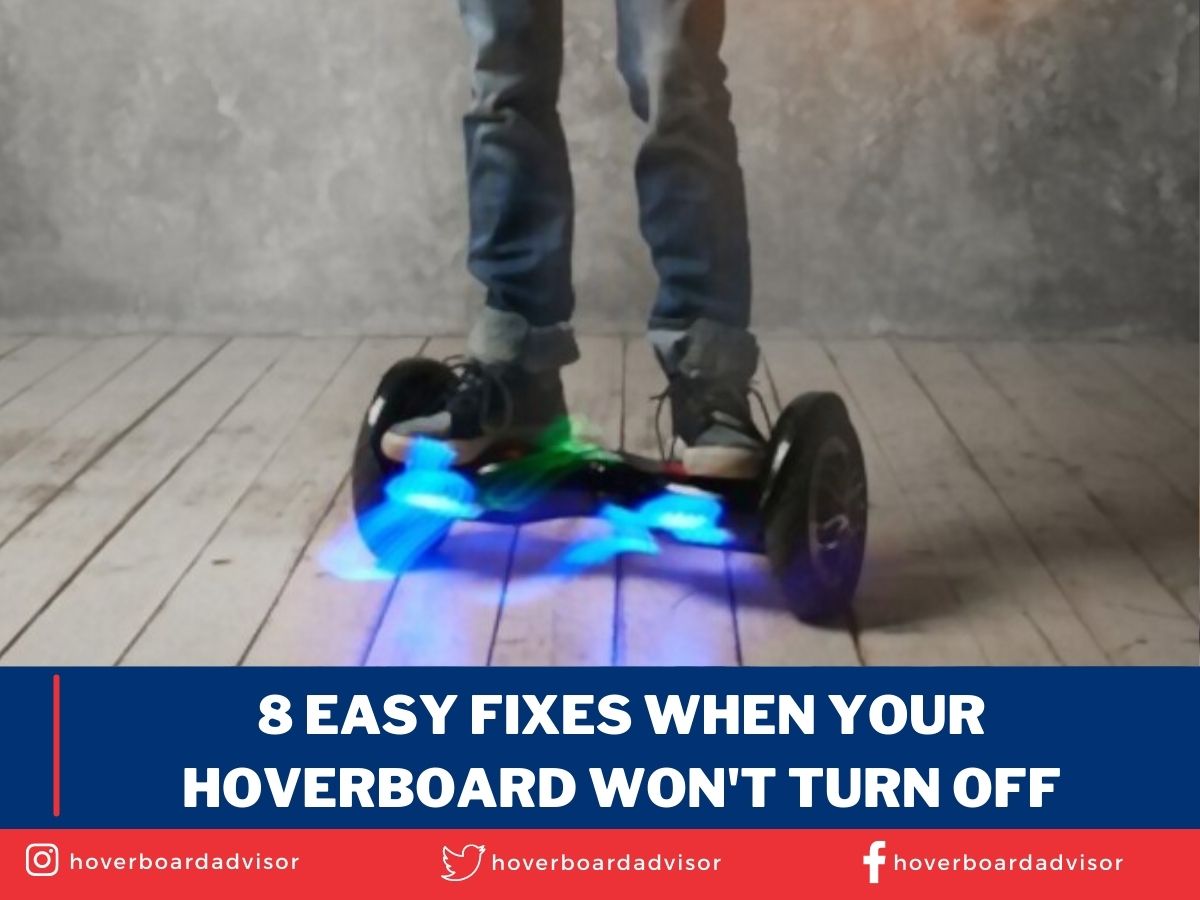 Hoverboards are cool and fun until they start behaving unusually. The biggest reason behind their unusual behavior is mishandling from the rider while riding or charging.

Sometimes hoverboards won’t turn off by pressing the power button, and you will feel no reaction on the power button. This is caused by many reasons like sensor failure, battery error, overheating, short circuits, etc.

People get scared when this problem occurs, and they start panicking because of continuous beeps and flashing lights on the Hoverboard.

Many of them rush to the repair shops and spend money to fix this issue. But, there are some fixes that can help you turn off the Hoverboard and save your money.

Here I will discuss 8 easy fixes when your Hoverboard won’t turn off. These fixes don’t require any professional skills or deep knowledge of hoverboards.

You just need to have a basic understanding of hoverboards and know how these things work. These fixes can save your time, money, and, most importantly, your Hoverboard.

Let’s discuss common problems that can cause the Hoverboard won’t turn off. Knowing the problems or reasons behind the issues can help you quickly fix the device.

Common Problems That Cause Hoverboard Not To Turn Off

Here are some reasons when the Hoverboard won’t turn off by pressing the power button. These problems will help you determine which fix you should try according to the situation, and this will help you quickly fix the issue.

These are the 8 possible reasons or problems that can cause your Hoverboard not to turn Off. I will discuss these in detail to help you fix the issue and enjoy your Hoverboard again.

If you know the reason behind your stuck Hoverboard, you can go through the fix and easily turn it off. You will need to try all the fixes if you don’t know the reason.

Let’s discuss 8 easy fixes when your Hoverboard won’t turn off.

One of the biggest reasons your Hoverboard won’t turn off is the fault in its battery pack. This can occur due to a cheap or retired battery pack.

The significant sign behind this issue is that your Hoverboard will beep, and the different lights will flash while you push the power button.

Those lights indicate that the voltage or current coming from the battery is unstable and can harm your motherboard. That is why it won’t turn off.

This battery fault can be caused by the overcharging and overheating of the Hoverboard.

Solution: The simplest fix for this problem is: Replace the battery with the recommended one by the company. You can see the battery recommendation in the manual book that comes with your hoverboard packaging.

If there is nothing about the battery recommendation, you can call the company and order the new one according to your Hoverboard’s model.

Sometimes your Hoverboard starts beeping continuously for no reason, and you won’t be able to turn it off by pressing the power button. This can appear due to several reasons, including overcharging, mishandling, internal short circuit, etc.

The continuous beeping indicates that there is something wrong with the Hoverboard’s internal mechanism, and the rider is not advised to ride it.

Solution: There are two ways to solve this issue. The first one is to reset and calibrate the Hoverboard. For this, you need to long-press the Hoverboard’s power button and wait for the different lights to start flashing.

After a few minutes of flashing, they will be stopped, and a continuous light will be turned ON; this means that it is successfully calibrated. Now you will be able to turn it Off by pressing the power button.

If this doesn’t work, then you will have to disassemble the body and plug out the battery. This will turn Off the Hoverboard, now check the battery’s temperature.

If it is overheating, then keep it away from your property; it may explode and cause severe damage. If the temperature is normal, you can plug it in again and turn it ON the Hoverboard. It will surely solve the problem.

Also Read: Hoverboard Got Wet and Won’t Stop Beeping: How to Fix?

If different lights are flashing on the Hoverboard and you wouldn’t be able to turn it OFF or ride, this can occur due to a software glitch.

This is one of the most common problems you may face when you overcharge the Hoverboard. The different lights will start flashing, indicating that something is wrong with the battery and its software.

Solution: You can easily solve this issue by plugging out and then plugging back the battery. Most of the time, the motherboard just needs a simple restart to sort out things on its own, and a simple battery plug and unplug can do the job. This will fix the issue, and you will be able to drive your Hoverboard again without spending money on its repair.

Hoverboard consists of many important sensors that help it to run smoothly on different kinds of surfaces. A sensor failure can cause the Hoverboard’s software to break down and get stuck on the Turn On mod. In this situation, the Hoverboard usually doesn’t react, and their power button just stops working.

Solution: First of all, open the Hoverboard’s body and plug out the battery. This will turn off the Hoverboard. Now, examine all the sensors one by one and search for the failed one. You can easily spot the failed sensor by the sign of burn or short circuit around it.

You can buy the new sensors from your Hoverboard’s brand and replace them with the failed ones. After successfully replacing the sensors, now keep the Hoverboard on the Flat Level Surface and press the power button for 5 to 10 seconds. When lights start flashing, leave the Hoverboard for a few minutes. This will reset the software and recalibrate it to run the new sensors.

It will solve the issue, and you will be able to start riding your Hoverboard again.

Also Read: Why Does Hoverboard Shake and How to Fix It?

Sometimes, you plug the charger into the Hoverboard and leave it for a long time on charging. This can cause the Hoverboard to be overcharged, and when you turn it On, it starts acting weird and won’t turn off by pressing the power button.

Also Read: What to Do If Your Hoverboard Won’t Charge?

Hoverboards have a Lithium-ion battery pack that is considered one of the most powerful batteries. But, everything has some flaws; similarly, these batteries can be overheated due to mishandling.

Sometimes, people mishandle the Hoverboard by overcharging, wrong riding, or charging via the wrong charger. This causes the Hoverboard’s battery to overheat and cause a breakdown. The most common problem due to overheating is that the Hoverboard won’t turn off. You can easily fix this issue with the following solution.

Solution: You just need to plug out the battery and leave it outside for a few hours. The battery will be discharged of some charge during this time, allowing it to cool down. After that, you can plug it in the Hoverboard back and enjoy the ride.

Also Read: 11 Easy Fixes When Your Hoverboard Won’t Turn On

Internal short circuits are the biggest cause of hoverboards not turning on or off. Hoverboards consist of different electronic components that work together to run the Hoverboard. If one or more components fail or are not working properly, it affects the Hoverboard’s overall performance.

Moreover, hoverboards’ components work in a way that if a component is not working properly, then the others will also not work. Due to some internal short circuit, sometimes hoverboards won’t turn off and indicate some red lights and beeps.

This is a complex issue, but you can fix it at home.

A faulty motherboard can cause the Hoverboard not to turn off by pressing the power button. As you may know, the motherboard is the brain of any electronic device because it controls all other components that work together to run the machine successfully.

If the motherboard has some issues and is unable to work properly, it will affect the whole device. Similarly, hoverboards will act weird and won’t turn off due to the faulty motherboard.

Now turn it ON and keep it on the Flat Level Surface, and long-press the power button. It will reset and recalibrate the Hoverboard for a better riding experience.

Hoverboards are the most loved mini-vehicles of this century. Everyone loves them and has wanted to have them since their first release. They are great mini e-vehicle to travel short distances and do fun activities until they start acting weird. Hoverboards are just like any other vehicle when it comes to components breakdown or malfunction.

Although they are made with advanced technology, there are some flaws that can cause different failures. Many people have reported different issues and problems with the Hoverboard, and one of them is Hoverboard won’t Turn Off.

This problem may occur due to different reasons, and I have discussed 8 problems behind Hoverboard won’t turn off. I have also written the most helpful solutions and fixes to those problems. These fixes will help you repair your Hoverboard at home and save your money.

I have written the most common issues behind this problem and provided the best solutions. If you are facing any problems in fixing your Hoverboard, you can share it with me by writing in the comment section below. I read all the comments regularly and answer them within a few hours.

You can also share your valuable views or experiences to help others fix their Hoverboard. This would be your contribution towards all the hoverboard community. So, don’t hesitate to comment.